The so-called donor mare is inseminated while in heat.
The heat period is monitored by ultrasound in order to determine the recovery date as accurately as possible following ovulation.
The embryo is generally recovered 7 days after ovulation. It is currently still impossible to know at this stage, prior to recovery, whether the embryo has been fertilized.
The recovery liquid is filtered and examined for the presence of an embryo using a binocular magnifier in a sterile environment (hood).
If there is an embryo, it is washed in order to eliminate the cells and desquamations in the uterine liquid. It is then transferred to the uterus of a so-called recipient or surrogate mare. She will carry the fetus to term, give birth to the foal and raise it until it is weaned.

The choice of recipient mare is important, to increase the embryo transfer success rate.
A mare with a known pregnancy rate and good maternal instincts or a young maiden (mare that has never been covered) must hence be chosen, preferably one that is larger than the donor mare to ensure optimal foal development. Recent experiments have shown that the uterine environment during pregnancy is important for development of the fetus and for growth and metabolic development of the foal after birth. The fetus is capable of adapting to any uterine environment, but the recipient should ideally be of the same breed as the donor to ensure that its metabolism is not modified.
Today in France, most of the recipient mares used are French Trotters that have been retired from racing (three-quarters), followed by saddle mares. Draft mares are less and less frequently used.
Retired Trotter mares are currently less costly to purchase and their similar size to blood mares is more highly appreciated.

Synchronization of the recipient mare

The recipient must be synchronized with the donor; i.e. they must both ovulate in the same period.
This requires highly accurate gynecological monitoring, induction of ovulation and, in some cases, a synchronization treatment for the potential recipients. The best transfer rates (% of pregnancies 14 days after transfer of an embryo) are obtained when the recipient is on day 5, day 6 or day 7 with respect to the donor’s ovulation (day 7). The recipient must hence have ovulated on the same day as the donor or 1 or 2 days later. The success rate is lower outside this 3-day window.

The embryo is recovered on day 7 or day 8 (day 0 = day on which the donor ovulates) by flushing the donor’s uterus 3 or 4 times with a buffer medium. The medium is packaged in bottles or sachets. The liquid is placed in the mare’s uterus via a probe. The uterus is massaged (rectally) in order to distribute the liquid as far as the uterine horns. The liquid is then recovered and filtered directly behind the mare. Other filtration techniques may be used in the laboratory.

The recovered medium is then examined under a binocular magnifier for the presence of an embryo. These operations are carried out in the laboratory in a horizontal laminar hood, enabling the embryo to be handled in an environment that is as sterile as possible.

Transfer to the recipient is the most delicate stage, requiring the highest levels of experience.

There are two transfer techniques:
• trans-cervical: the embryo is deposited in the recipient’s uterus by being passed through the cervix. The embryo, packaged in a straw, is transferred using a special gun. This technique is currently the most widely used in the field. The technical difficulty lies in passing the tube through the recipient’s cervix with minimal handling to avoid the release of prostaglandins by the uterus, which would endanger the future pregnancy.
•    surgical: the embryo is injected directly into a uterine horn after incision of the recipient’s flank and exteriorization of the horn. The recipient then requires post-operative treatment. This technique is now hardly ever used in practice given the equipment, care and pharmacological treatments required during and after surgery. It could be recommended when the recipient’s cervix is very difficult to pass through, but in such a case it would be preferable to retire the recipient mare.

The embryo can be chilled, enabling it to be transported. The embryo must be transferred into the recipient within 24 hours. This technique is a means of managing recipients that are not on the same sites as the donors. No differences between the outcomes of fresh and chilled embryo transfers have been found provided that the requisite handling and preservation conditions are fully respected.

Four foals obtained through a collaborative research project between the French national research agency (INRA) facility in Nouzilly and the Jumenterie du Pin stud farm were born in 2014. The originality of these foals lies in the fact that the embryos were biopsied and cryopreserved prior to transfer.

Equine embryos have several characteristics that make them difficult to cryopreserve (preserve by cooling them to very low temperatures): the capsule (membrane) that forms around the embryo when it arrives in the uterus prevents the cryoprotectants from fully penetrating the embryo, contrary to embryos of other species that do not have a capsule; their widely varying size, of up to 700µm at 7 days, is a further obstacle to cryopreservation due to the crystals that form in the fluid-filled sphere of the embryo as the temperature decreases.

To overcome these obstacles, the embryo is emptied of most of its liquid by micro-aspiration before it is placed in contact with the cryoprotectants (alcohol and lipids that limit ice crystal formation). It is then frozen by means of vitrification (an ultra-fast freezing process whereby the embryo is plunged directly into liquid nitrogen) at -196°C and kept in that state until transfer.

This technique is still being developed in research laboratories in order to simplify the process and make it applicable on a larger scale in the field. To date, the technique can only be implemented by handlers with experience of micro-manipulation and the equipment is still costly. 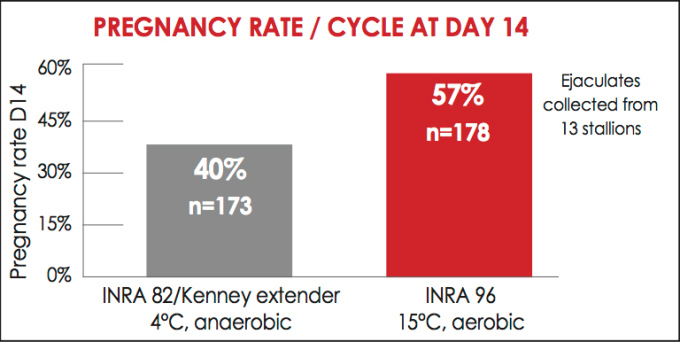 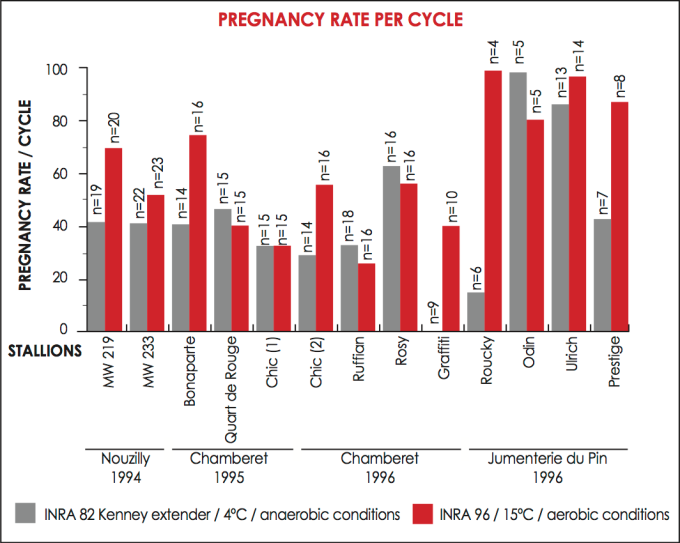 On account of its cost, this technique is intended for breeding stock with a high genetic value.