Developing of an optimized procedure for oocyte collection would be critical for allowing the use of in vitro embryo production technologies (IVEP) and somatic cell nuclear transfer (SCNT) as tools for rebuilding balance in animal numbers for such endangered species. One young adult puma female of 2.5 years and two sister juvenile females of 1.5 years of age, were injected with 750 UI eCG five days prior to laparoscopic ovum pick-up (LOPU). The puma adult and one of the young females were also injected with 500 IU of hCG 24-30h prior to LOPU to promote in vivo maturation of oocytes, while the other sister female could not be injected and served as control. All injections were conducted using blow darting technique. Animals were deprived from food (24h) and water (12h) in preparation for surgery.The LOPU procedure was similar to the one previously described in small ruminants. Briefly, the females were restrained on a laparoscopy table in a 45° angle and then, using a 5 mm laparoscope and an atraumatic
grasping forceps to uncover the ovaries, all follicles ≥ 2 mm diameter were aspirated using a 20G needle mounted in a plastic pipette connected to a collection tube and vacuum line. A grand total of 98 oocytes were recovered, representing >90% of the number of follicles aspirated and an average of 32.6 oocytes/donor. Interestingly, 42/43 oocytes recovered from the 2 females that received hCG were showing expanded cumulus which has been shown to be an accurate sign of in vivo maturation and readiness for IVF, while from the female that was not injected with hCG all oocytes had compact cumulus and required in vitro maturation prior to further processing. IVM was performed in 50 μL drops of maturation medium under mineral oil, at 38.5°C in humidified atmosphere with 5% CO2 in air for 24 h. The maturation medium consisted of M199 supplemented with bLH (0.02 U/ml), bFSH (0.02 U/ml), 17β-estradiol (1 μg/ml), sodium pyruvate (0.2 mM), gentamycin (50 μg/ml) and 10% heat-inactivated fetal bovine serum. Unfortunately, we were unable to obtain semen to conduct IVF as originally planned, so we resorted into vitrifying the oocytes in order to store the oocytes until semen becomes available. The in vivo matured oocytes were vitrified shortly after collection while the immature oocytes were vitrified after completing 24h in the abovedescribed IVM conditions. In all cases, prior to vitrifiation, the oocytes were completely stripped of the cumulus cells by pipetting in handling medium containing 0.1% hyaluronidase. Oocyte vitrification was conducted following the procedure by Vajta et al. Briefly, oocytes were sequentially passed through holding medium (HM, TCM199 supplemented with 20% FBS), HV1 medium (HM with 7.5% DMSO and 7.5% ethylene glycol, v/v), HV2 medium (HM with 1M sucrose plus 16% DMSO and 16% ethylene glycol, v/v) and finally placed in homemade cryotops (longitudinally hemi-sectioned 0.25 straws) prior to immersion in liquid nitrogen. 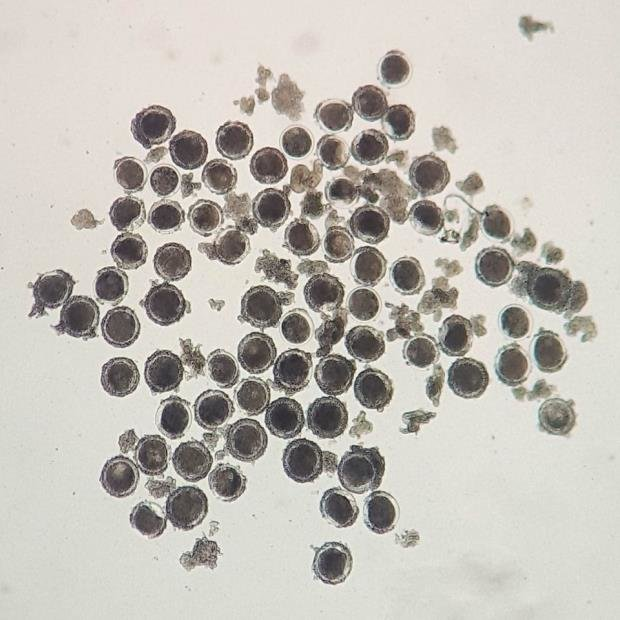