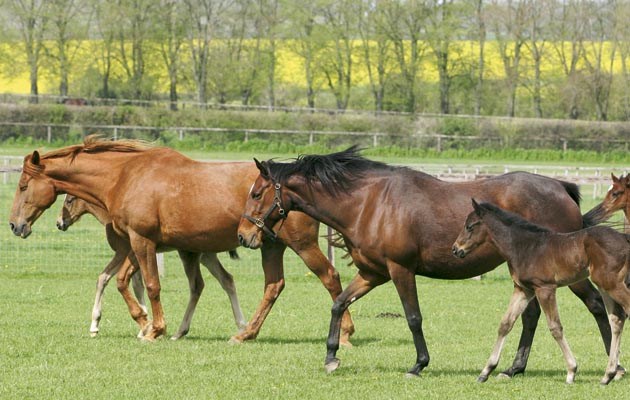 During the breeding season, a mare ovulates (releases an egg) every 18-24 days — a process called cycling. Each egg forms inside the ovary in a structure known as a follicle.
“A mare is in season — or oestrus — for four to seven days, although this can vary from two to 12 days,” says vet Emma Houghton of Endell Veterinary Group. “She is then out of season (in dioestrus), for 14-15 days.”
Timing plays a vital role in successful artificial insemination (AI). The point of ovulation can be manipulated to enable insemination of semen at the optimum moment, according to its type (see below).
“During a season, follicle growth goes hand-in-hand with an increase in the oedema [fluid] within the mare’s uterus,” explains Emma. “When the follicle reaches a key size of 35mm we can use either one of two ovulation-inducing drugs, Chorulon and Ovuplant.
“The mare should then ovulate within 24-48 hours, which gives us a window to order and inseminate semen prior to ovulation. Follicle size may be smaller, though, particularly in ponies, so it helps to know a mare’s breeding history.”

A good semen sample will contain billions of sperm, but which type is best for your mare?
➤ Fresh: straight from the stallion (who must be on-site or nearby), fresh semen offers the highest fertility rates and is longest-lasting once inseminated. It must usually be used within three hours, but this varies between stallions.
➤ Chilled: next best fertility-wise, chilled semen has been mixed with extenders, preservatives and antibiotics to lengthen its lifespan to up to 30 hours. This enables insemination at home and widens stallion choice to further afield in the UK, or even Europe. Timing is still an issue: it must be ready at the premises prior to your mare ovulating.
➤ Frozen: fertility rates associated with frozen semen have improved with the use of modern extenders and veterinary management. It can be stored ready for use and opens up a worldwide pool of stallions, but the considerable veterinary input required can push up costs (insemination must take place within six hours prior to, and four hours after ovulation). Sperm from certain stallions has better post-thaw motility — swimming ability — than others.
Semen choice will largely depend upon your mare’s age and breeding health. Fresh or chilled will maximise an older mare’s chances of conceiving — provided it arrives on time, prior to ovulation.
“Our breeding season coincides with several bank holidays,” says Fred Barrelet, a stud medicine specialist at Rossdales Veterinary Surgeons, adding that weekends and postal or courier failures can scupper plans to inseminate inside a critical timeframe.
“Semen should have been processed at an EU-approved collection centre and must be accompanied by the original veterinary health certificate. It is illegal to use semen from an unknown source or imported from abroad without the required health documentation.”

Good general health is essential for a mum-to-be, so keep your mare’s vaccination and worming programmes up to date and her hooves and teeth well maintained. But how else can you prepare her for AI?
“We’d rather see a mare too light than too heavy, so aim for fair condition,” says Edward Matson of Twemlows Stud Farm and AI/ET (embryo transfer) centre.
“Like females of all species, horses are more likely to conceive on a rising plane of nutrition.”
If you’re sending her to a stud or clinic for AI, pre-entry health requirements could include checks for contagious equine metritis (CEM), equine viral arteritis (EVA), equine infectious anaemia (EIA) and strangles.
Edward points out that pre-breeding examinations are not always definitive in predicting a mare’s chances of conceiving.
“It is difficult to assess a maiden [first-time] mare’s reproductive health before she comes into season,” he says.
“A specialised equine repro vet might suggest endometrial swabs or more complex biopsies with a potential problem mare. Around 80% of problems occur once the semen is inserted in the uterus, however, and you can’t tell too much till then.
“If your mare has foaled previously, give the vet as much information as you can about her breeding history. This should include when and how she was bred, the type of semen used and the cycle she conceived on — or why she didn’t. This can save a lot of time and money.
“Be realistic with an older maiden mare. She may be super-fertile or she may not, but you won’t know until you try.”

His looks, performance and temperament may tick all the right boxes, but will your chosen stallion’s semen get your mare in foal?
Relevant fertility data can be hard to obtain, warns Fred.
“The key measure of a stallion’s fertility is his per-cycle conception rate, but many stud owners don’t publish this,” he says. “The number of mares he gets into foal tells you nothing about the time taken. What you need to know is the breeding efficiency achieved with his semen.
“Ask the stallion owner, stud or semen vendor for the number of mares that become pregnant per cycle. A lot depends on management and the individual mare, but you need to hear an answer of about 50%.
“My advice with a young, maiden mare at the start of the season is to invest in semen from a top stallion. Most sport horses have a career behind them, however, so you may be breeding from a middle-aged lady. As with many species, the chances of getting a mare pregnant drop off with age.
“If she is older than 14 and barren [was not covered/failed to conceive the last breeding season], don’t use the most expensive stallion or frozen semen. Your chances of getting her pregnant more efficiently will probably be better the following year, once her fertility is proven and she has foaled without complications.”

AI can be carried out at home, at an equine clinic or at a specialist breeding centre. What might influene your choice?
“Studies show that pregnancy rates improve when potential stress is minimised,” says Emma. “Certain horses may be more relaxed at home, but you will ideally need stocks for ultrasound scanning and insemination.”
Insemination with frozen semen is particularly difficult to carry out at home, yet fresh and chilled also need a vet’s input.
“An AI package at a stud or clinic could well prove cheaper, as driving and visit fees often add up to more,” says Emma. “The benefit of a clinic is that the vet can examine a mare as often as necessary without the owner having to be there.
“Every mare is different, but an experienced repro vet with knowledge of AI will be able to see more detail in the uterus and follicle to tell exactly where she is in her cycle. Better care will most likely bring a better result — and fewer scans could lower costs.”

It sounds so simple — and often it is — yet AI can disappoint the unwary.
“Make sure you know the costs up front,” says Emma. “Ask if stud or clinic prices include extras such as livery, drugs and pregnancy scans, and whether you’ll pay the same the second time around if your mare does not conceive on the first cycle.
“Most AIs are fine, but complications can occur. Not all mares cycle every 21 days.
Others produce excessive uterine fluid so that when the embryo enters the uterus it cannot survive and is lost. There’s also a reasonably high rate of twinning with some mares. The uterus is typically not large enough to sustain both embryos — while there’s a high success rate if one is “squeezed” within the appropriate time, this does involve a risk to the other one.
“We don’t always know of potential problems until we start looking.”